We have a family membership for English Heritage. We originally joined back in 2011, and apart from a couple of years in the middle we have been members ever since.

I have previously reposted a blog from the old Fujifilm site about our first year of membership (English Heritage membership – what bloody great value!). I also did one for our second year which I recently realised I did not re-blog here as I have with the other old blogs.

In an attempt to get started on the blogging again I am posting this below now as I am also going to do a similar thing for recent years memberships because, as the title suggests – English Heritage membership is still bloody great value.

As with other old posts the photos have been unchanged and there was no editing at the time. The only minor changes are to a few bits of text.

Needless to say prices were correct at the original time of writing this post and have since changed.

So another year of English Heritage membership has been and gone. We didn’t manage as much as last year but it was still worth every penny of the £82 for joint membership without the shadow of a doubt. If you didn’t see last year’s blog it can be found here:

As with last year (which was actually 15 months thanks to an introductory offer) I thought I would give a round up of what we have done with our English Heritage Membership to show just how good value it is. Below is Kenilworth Castle, more on this later.

But as with last year it is still an associated site, and still 2 for 1 entry for EH members. 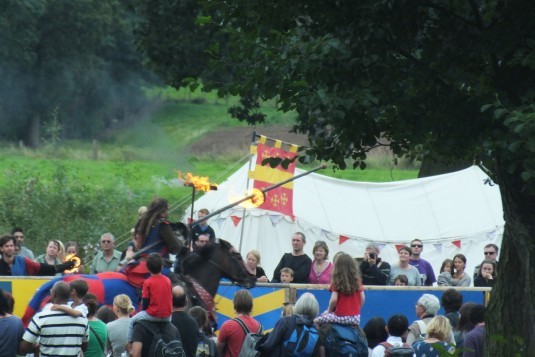 There was a talk given by The Warwick Warriors about differences between Hollywood fight scenes and how it would really have happened.

With a few japes along the way.

The a birds of prey display.

And the firing of the trebuchet. So one day and already we had saved £22.80 towards the membership.

The next stop was another associated site – IWM Duxford. Seen here is the Junkers Ju-52.

Duxford is a place I hadn’t been to in a long time. This is Sally B, a Boeing B-17 Flying Fortress. 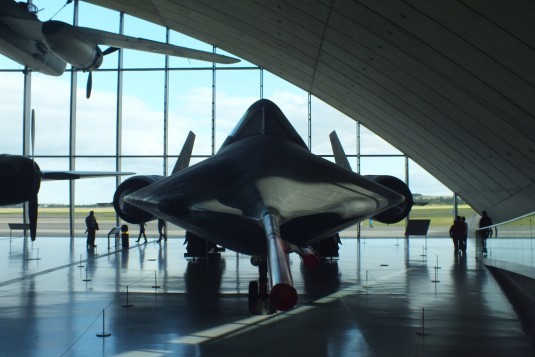 This was another 2 for 1 entry with EH membership and so another £17.50 saved towards the EH membership. Running total £40.30 – already almost halfway to making the money back.

Next up was the first EH site – Kenilworth Castle. 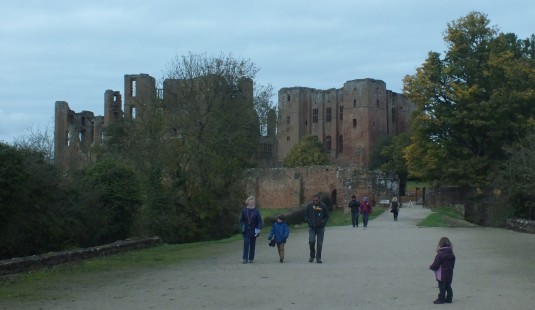 A castle was first built on this site in the 1120s by the royal chamberlain, Geoffrey de Clinton, who built the Norman keep and nearby priory. This was then extended by King John adding the outer walls and a dam to hold back a man-made lake.

After this the castle was developed as a palace. 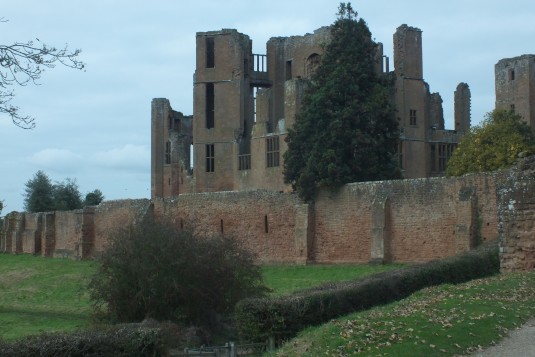 The gardens were part of a number of elaborate improvements made at the behest of Robert Dudley, Earl of Leicester, to receive Elizabeth I. The gardens were recently restored by EH from contemporary descriptions of the garden.

The fortifications were pulled down after the civil war in 1650.

The only part of the castle left largely in tact is Leicester’s Gatehouse. This was actually occupied until the 1930’s.

This will be one we definitely want to go back to as there have been new viewing platforms opened on the levels of a building built specifically for Elizabeth I’s visit. This is quite a big property, entry would have been £9 each for Jo and I – Beth would still have been free as children do not need to pay until 5 years old – two years older than most other places seem to be these days – so thats another £18 towards the membership. Running total now £58.30.

The next EH day was one I did on my own in March. The reason being it was a photography day I had been bought by my family. It was at Bolsover Castle and cost was about £70 – this was however only open to EH members.

The weather unfortunately was not great, but that did mean the opportunity for some rather atmospheric shots. We spent the morning outside before having the main lessons for the day in a bit of a re-arrangement of the normal day as the weather for the afternoon was due to be rain.

Details about Bolsover Castle can be found in my previous English Heritage blog.

The keep is in wonderful condition, with lots of decorations still in place.

And some very elaborate fireplaces. 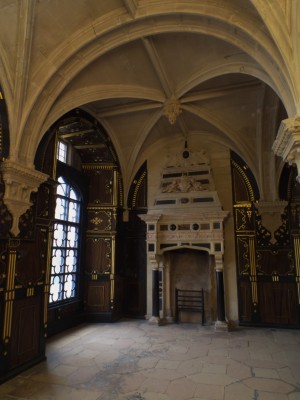 Leaving Bolsover, dusk was setting in and the mist left me with this parting shot. I’m not going to add this to the total as it would skew it unfairly, but will mention this again later.

The next EH day was a very short stretch of the legs around Berwick-upon-Tweed Castle towards the end of March as a break from the car journey up to Edinburgh. 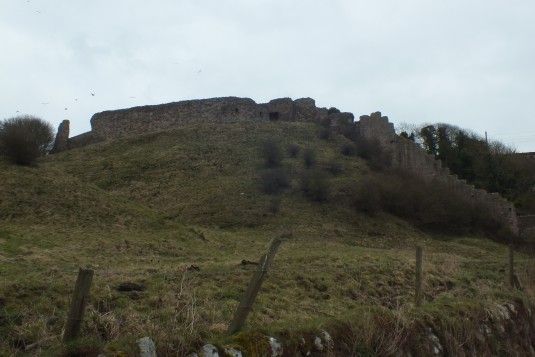 Originally built in the early 1100s the castle changed hands between the Scottish and the English for several times in the following centuries.

Though already in ruins a lot of the castle was removed during building of the rail line. The castle was superseded as the main defensive tool by extensive earthworks all around the town and the full circuit can be walked, though we only walked around the site of the castle. This was free to look around.

The next EH related day was another associated site. As a member of EH for more than one year we get free entry into the Historic Scotland sites – in this case Edinburgh Castle.

This is the site of settlements from as far back as approximately 900BC with evidence of bronze age homes on Castle Rock. The first castle was built in the 1100s, though there were hill forts before this.

The castle was a royal residence from being built until around 1600 after which it became more important as a military base and it still garrisons troops today as well as the numerous exhibits about the history of Scotland and the castle.

Being in such a prominent position on Castle Rock you can see the castle perhaps from more places than not in Edinburgh.

This was a quite spectacular saving of £16 each giving a running total now of £90.30 towards membership. Already more than we actually spent on the membership. 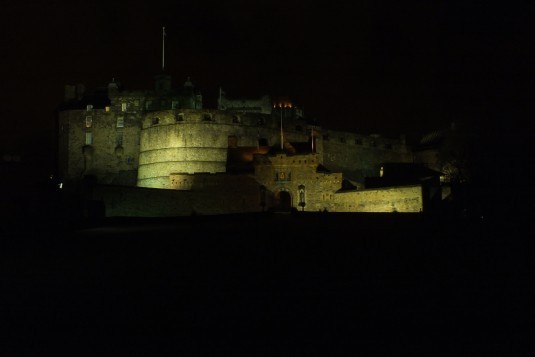 The next EH day was in early May, and back to a firm favourite of ours – Kirby Hall. Details can be found in the blog of last year’s membership.

The peacocks were showing off well this time.

Large grounds for little people to wear their legs out.

This was another £5.60 each towards the already recovered membership. Running total now up to £101.50 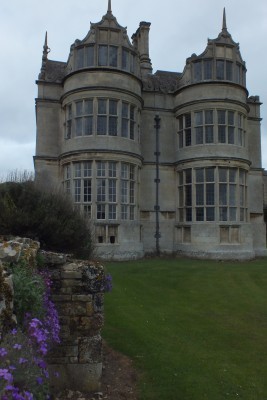 On to July and the next stop was a first time visit to Brodsworth Hall and Gardens. The hall itself has recently been passed to EH for management and restoration. There are areas of the house unfortunately damaged through years of neglect from hard times, but now further damage is being prevented.

It was two pictures from fellow Fuji user Paul Jensen that prompted me to look at Brodsworth Hall. One a not too dissimilar shot to this one: 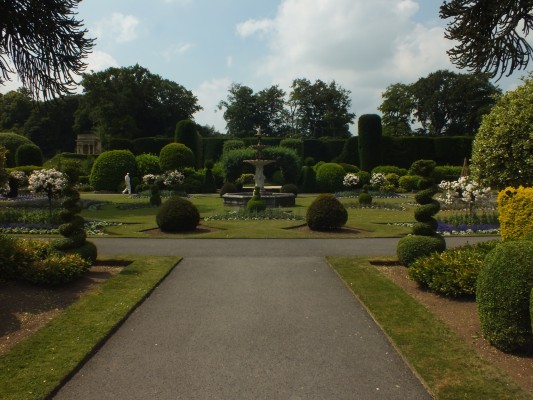 The gardens at Brodsworth are quite spectacular. 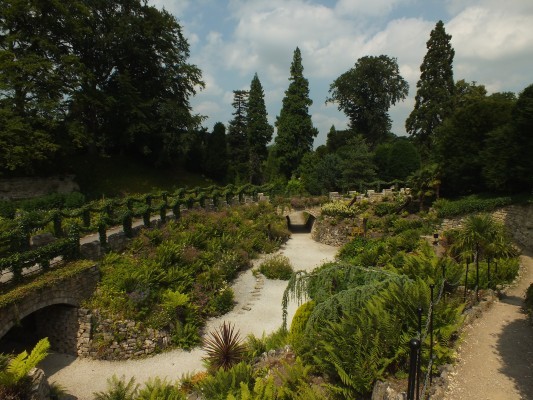 The final EH day from this year’s membership was a brief visit to Ashby de la Zouch Castle to see some friends. This was a jousting day although we did not actually stay to see the jousting.

Built as a manner house in the 12th Century it reached castle status in the 15th Century, though the final design was never full built, with only one tower being completed.

You can still access the top of the tower as there is one staircase still in tact with the help of some restoration. It is one of the tallest towers of its type in the UK and you can see for quite some way. It is 98 steps to the top.

This was a further £4.60 each towards the membership.

This was the end of another great year’s membership. Though we did not do anywhere near as much as last year, you can see we comfortably made the money back. The final total being £129.90 saved towards membership – £47.90 more than the membership cost.

Even including the photography day it was only about £25 additional to the membership when offset against the money saved. Comparing the two years together that still meant an overall saving of £70 over the two years. How amazing is that?

We are EH members again this year and so I dare say there will be another blog like this at some point after July next year. Once again I cannot state enough just how much we have enjoyed our membership and are looking forward to another great year.

I hope you have enjoyed this whistle stop tour as much as we did, any comments you have would be greatly appreciated.

A few more from my evening wander in Bristol the other week
Having a wander around @gloucestercathedral today, just waiting for the next crypt tour. Already walked round the corridors of Hogwarts
Been a long time coming but met with some photography friends in Bristol on this work trip for an afternoon and evening of photography. A couple of light trails on Park Street
Today is likely a 2 camera day, photographing a wedding today at @cleyhallspalding
Finally finished sorting through photos from the evening photo session at @newarkairmuseum. You can see more on the pinned Post in my Facebook page (link in my bio)
Went for a lovely walk in Leigh Woods this morning before it got too hot. Only took a few photos when we stopped for drinks