As a break from reproducing old blog posts from a previous site I used I thought it was time I put up something new.

Until part way through 2014 I had never really done any long exposure photography apart from a couple of minor efforts. However, having a Fujifilm X-E2 for review (which I am still writing at the moment and will hopefully be completed shortly, the Fujifilm blog can be found here) I decided to make the most of the greater quality and resultant versatility this had over my own HS20 so here are some of the results.

My first efforts with the X-E2 on long exposure were in August 2014. This was an evening trip out which started initially as trying to capture some golden hour time which never happened thanks to the lack of sun – it turned from a nice day to a rather overcast evening – and finished looking over the A1 from the A47 just a few miles south of Stamford. Though getting late (about 21:30 by the time I got to this spot) the road was still busy so I had a go at capturing some light trails – here is the best result.

For those interested here are some of the basic EXIF data:

There was no editing done to this image except for a crop.

I also had a go later in August with long exposure on some waterfalls. This gives a look I had often wanted to have a go at but living on the edge of the fens there aren’t many places where you get waterfalls – it’s all a bit too flat. But a week in Yorkshire gave one or two opportunities.

The first was Linton Falls. Quite an expansive set of falls it wasn’t possible to fit the whole lot in so it was a case of finding bits that worked on their own. 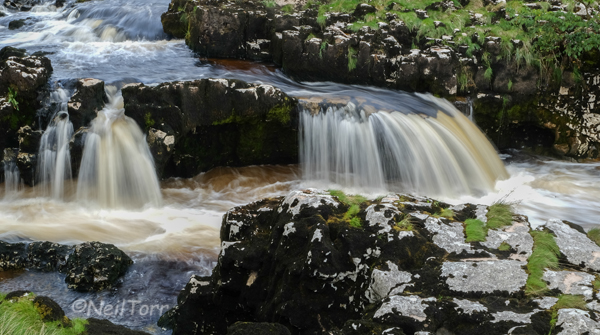 It was a gorgeous summer day – not the best for what I was trying to achieve unfortunately without the necessary filters which I do not own. The exposure wasn’t quite as long as I would have liked (although this was guess work). As a result there was a certain amount of editing in this to bring some of the highlights under control, though I was not unhappy with the original either.

As with the previous one, a certain amount of editing was needed to bring the highlights under control.

Though there were a few other places to attempt the next successful try was in Skipton Woods.

These waterfall efforts were the best of the long exposure results from Yorkshire and was quite happy with them, particularly the one in Skipton Woods.

There have been some further experiments since that will follow in Part 2. This will include more light trails – some with a fun fair as the main subject, and also some simply low light work with lit subjects.

As always, any comments and CC would be greatly appreciated.

The follow on experiments can be found at the links below: