Time for another old photo challenge. This time – Shadow.

I am only going to post one photo for this challenge and I would love to know what you think after seeing this, but before you see the photo here is a little background to it.

The photo was taken in February 2016. My wife and daughter were watching the latest show my dad was performing in Kings Lynn (he does a lot of amateur dramatics, mainly Gilbert and Sullivan, and on this occasion was playing Jack Point in Yeoman of the Guard with the West Norfolk Gilbert and Sullivan Society). I was walking around some areas nearby in Kings Lynn with my son as he was too little to sit through the show.

It was a bitterly cold day and very windy so I was wondering with my son with camera in hand popping inside a few places partly to try and shelter from the cold and the wind and partly trying to find places of interest to photograph.

One of the places we went into was Kings Lynn Minster – http://www.stmargaretskingslynn.org.uk/

Whilst being a big stone building it was not in truth the warmest place in the world, but being out of the elements it seemed warm in comparison to outside. With the doors being open my son and I were not the only ones seeking shelter from the wind. To one side of the entrance are the votive candles which in Kings Lynn Minster can be put on a large metal sphere frame suspended from the ceiling. With the lights shining down from above this frame casts quite a shadow on the floor below.

This was the first time I had been in to the minster and the shadow was particularly clear. I have only been back once since but the shadow was no where near as well defined.

In addition on this occasion there was also a homeless man who, seeking shelter from the cold and wind, was asleep on the chairs by the votive candles. He had found refuge almost literally in the shadow of the cross.

So here is the photo: 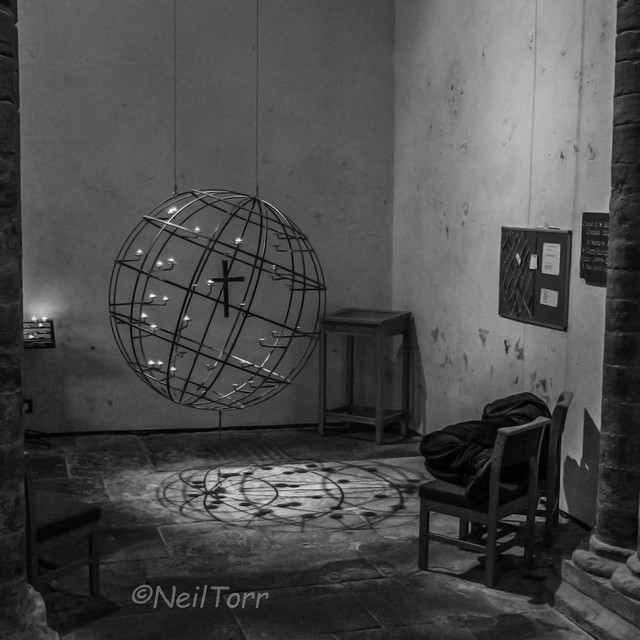 Thanks for taking the time to read this post, I hope you like the photo. If you have a moment I would love to know what you think.