As per my re-start post I am going to be re-blogging some of my posts from a site that unfortunately no longer exists in an effort to get working on my blog again.

As with other posts of old blogs the photos are as taken with the exception of some cropping.

On 30 June 2012 I went to the RAF Waddington International Airshow – the largest RAF organised show – with Jo, Beth and a couple of friends from uni. This was the second time I had been, having been for the first time last year. It was going to this airshow last year that finally gave me the drive to get myself a decent camera which lead to me getting the HS20. The camera I had used previously was a Panasonic compact which though good did not have a sufficient zoom to carry off the job. I thought I would share the experience and some of my favourite photos from the day.

We set off at about 7:45 in the morning and before long became very worried as we were driving through torrential rain struggling to to see the car in front and thinking the whole time we were going to get soaked at the show. But we were determined to carry – or at least I was – and we were rewarded with the sun coming out and making a lovely day if still a little overcast. The drive was remarkably quick with several dedicated routes to the show – the only real hold up was where presumably a local council had decided to put some roadworks up on one of said routes – which happened to be the one we had taken – and had to wait for many, many traffic light changes. But once past that the traffic was clear apart from a few minutes wait at the entrance itself – altogether very impressive.

All pictures were taken hand held, the only processing done to any of these is cropping. 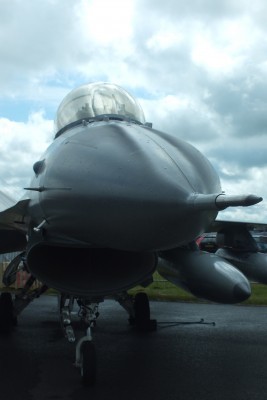 As Well as the airshow there were several of aircraft on static display like this F-16.

The first thing we saw flying was actually an E-3 AWACs but I was behind the wheel of the car and couldn’t take the photo – bummer, but there are photos of the static E-3 later later. The first thing in the air I got photos of was the RAFs Falcons Parachute Display Team. 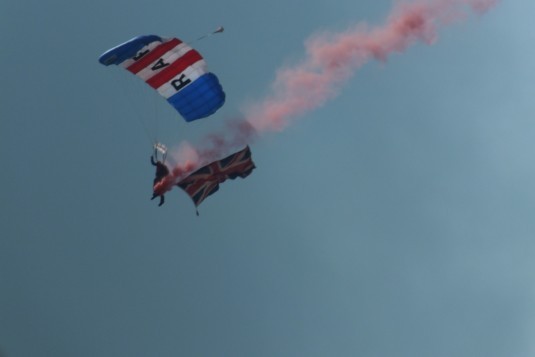 The first thing we saw flying was actually an E-3 AWACs but I was behind the wheel of the car and couldn’t take the photo – bummer, but there are photos of the static E-3 later. The first thing in the air I got photos of was the RAF Falcons Parachute Display Team.

Tornado GR4 during role demo display – ground attack. Unfortunately I did not get many of this due to daughter necessities. It was a shame as there were chances to get some amazing shockwaves shots with the water vapour trails from the top of the air intakes.

The next thing of note was the Royal Navy Black Cat display team in a pair of Lynx HMA8s.

I liked this – having the people on the campervan almost on a level courtesy of the perspective. 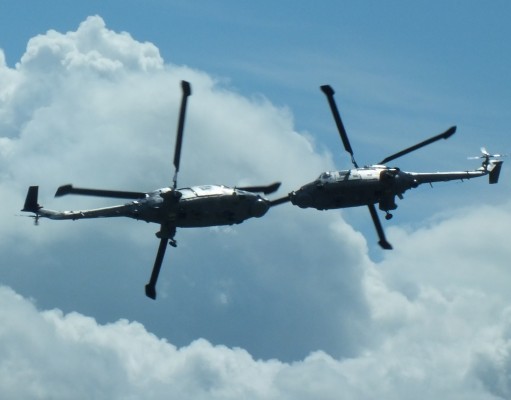 It’s not just the Red Arrows that do crazy manoeuvres. 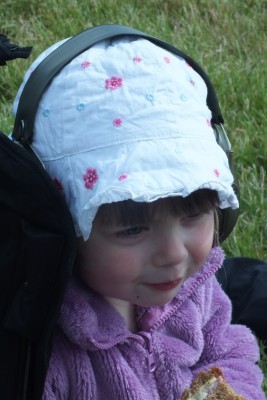 Beth seemed to be enjoying this and decided it was time to eat her sandwiches. Notice her attractive army surplus ear protectors which suited her flowery hat so well. 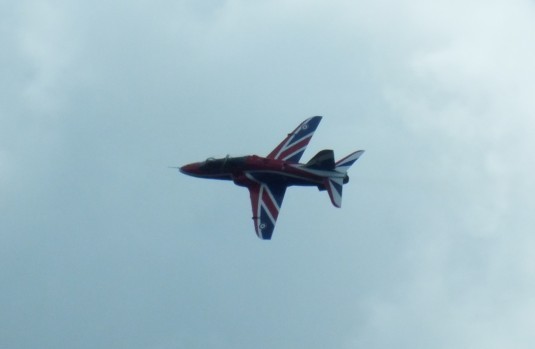 Then a single Hawk T1 from 208(R) Squadron did a short display.

Rather than the standard squadron Black this one was painted in Union Flag colours. 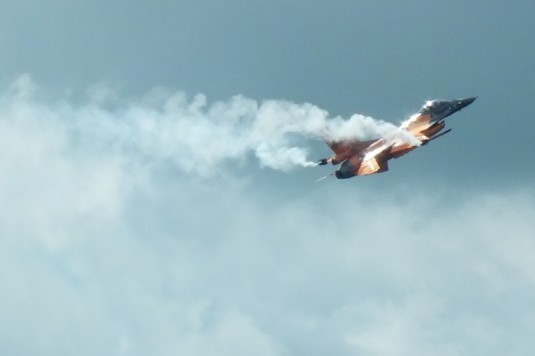 Next up was the Royal Netherlands Air Force F-16 Demo Team currently comprising of personnel from 312 and 313 Squadrons.

As well as the smoke trails you can also see the condensation trails in this photo.

You can see the pilot’s head here – one Captain Stefan ‘Stitch’ Hutten. 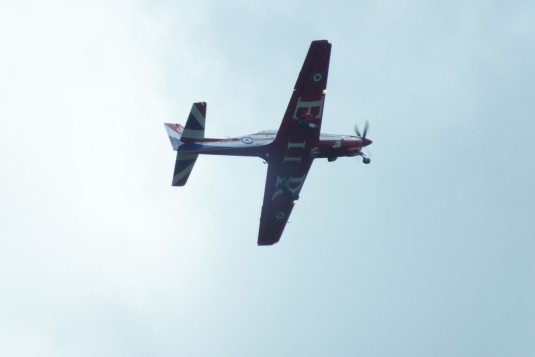 Next up was a single Tucano from 72(R) Squadron piloted by Flight Lieutenant Jon ‘Bondy’ Bond in special Jubilee markings.

Then came the Red Arrows who had a very busy weekend with Armed Forces Day they flew from Scampton in the morning to Waddington, returned to Scampton for a rest before doing a flypast at Messingham and then Trowbridge before arriving at Exeter to prepare for a display at Plymouth. As if that wasn’t enough they then did two more flypasts on the Sunday as well as another display at Waddington. 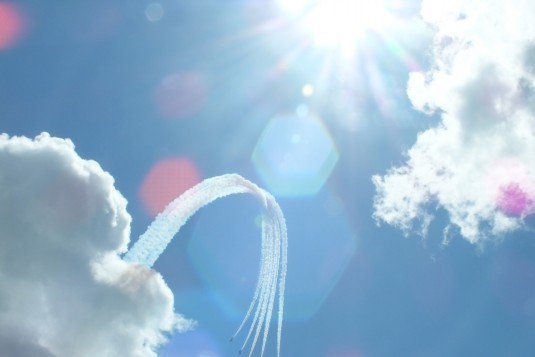 ‘No, your left!’ I liked this particularly as it shows how close to the ground they were as well as each other – must take some balls to do this.

Beth was bought a cookie as big as her face – and a lot of it was on her face afterwards as well. 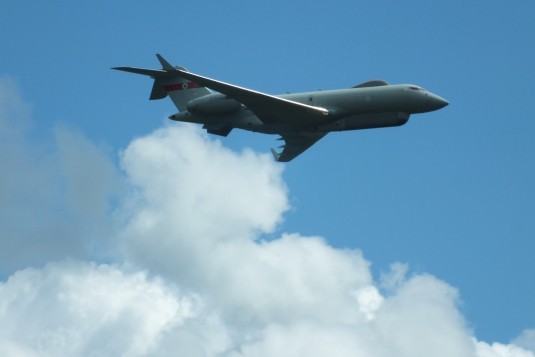 Sentinel R1, an airborne radar platform – just a couple of flypasts from this one.

Before it decided to try and land on a truck. 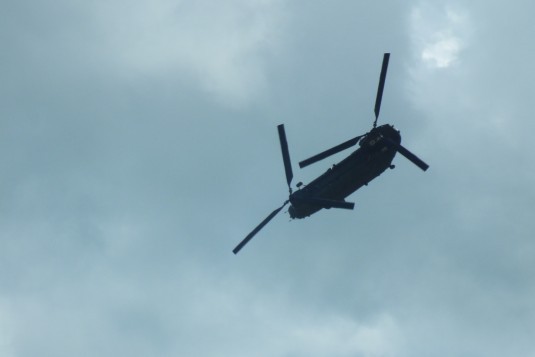 The guy in the back must have been hanging on for dear life.

As I said earlier as well as all of the flying display (there is more to come) there was also lot to see on the ground such as this Hawker Hunter T7 seen here in the colours of the Black Arrows – one of the predecessors to the Red Arrows. 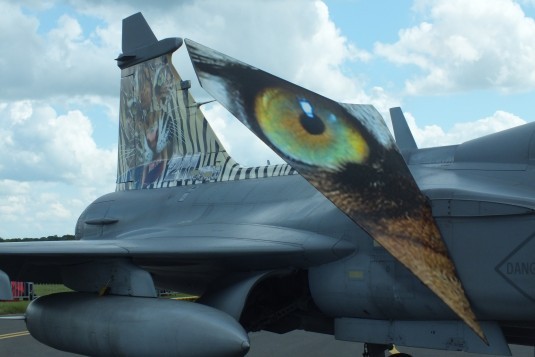 With tail art as well.

Then it was time for the Battle of Britain Memorial Flight – and unfortunately another stop for Beth so not too many photos of these but a few I was proud of. 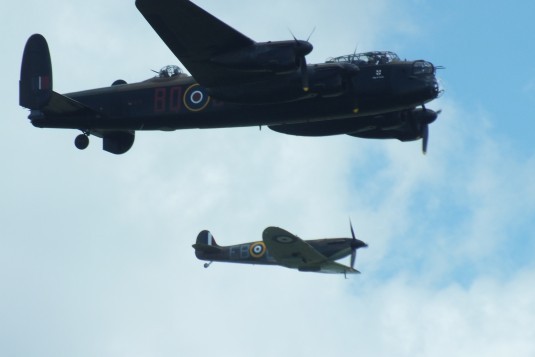 I think this is the first time I had seen an outing of the BBMF and there wasn’t a Hurricane – to Spitfires accompanied the Lancaster on this occasion. A Hurricane was expected so I am guessing last minute changes due to maintenance problems.

Then it was time for the F-18C Hornet from the Swiss Air Force. 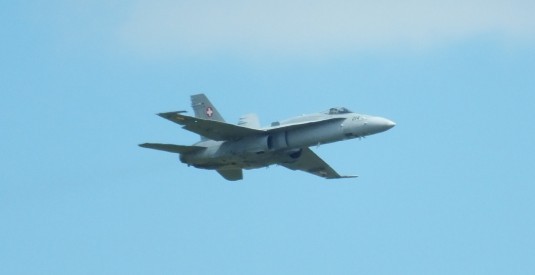 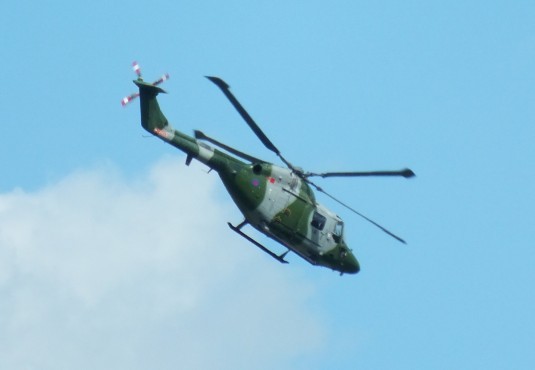 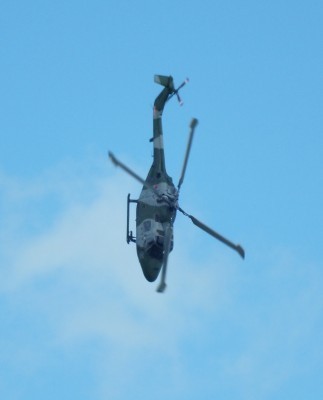 This is the right way up.

The Korean Black Eagles – we were inside for a lot of this display so unfortunately this was the only half decent shot I got. A shame as this is the first time the display team has flown in the West.

The MQ-4C Broad Area Maritime Surveillance unmanned aerial vehicle. I knew this was big from what I had read about it previously but hadn’t realised just how big.

A Typhoon FGR4 on static display – one of these was going to be flying soon. 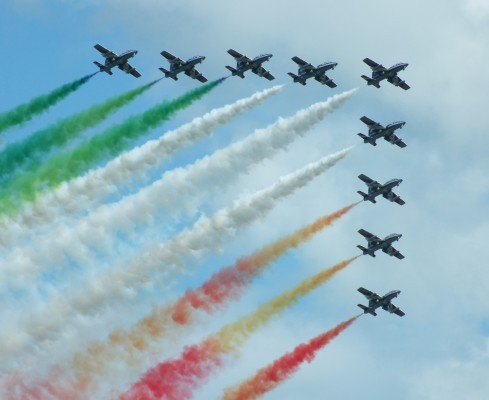 The Royal Saudi Air Force display team – Saudi Hawks. The planes they use are a variant of the Hawks used by the Red Arrows. In fact much of the training given over the years has been by ex-Red Arrows team members.

Typhoon FGR4, what a cracking plane. Ended up vastly over budget when made but what the hell? 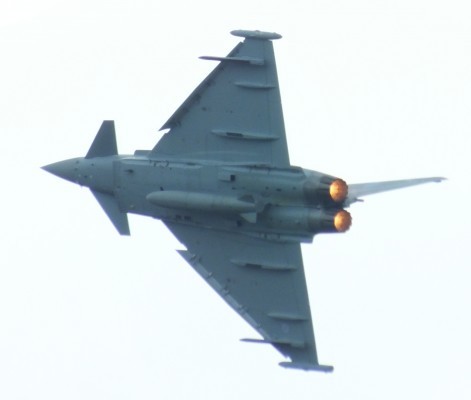 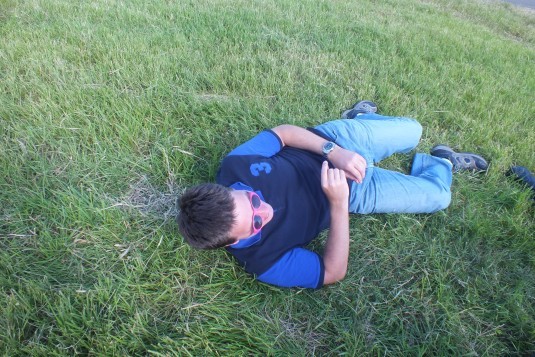 This is Robin, one of the friends that came with after he got hold of Beth’s sunglasses which he still has on. What you can’t see off to the side is Beth with a knuckle duster…

Everything from the large to the small. Little helicopter BIG plane. The helicopter is an OH-6 Cayuse and the plane is another Hercules.

E3 AWACS – monitoring the skies for hundreds of miles around this when in use with its powerful radar dome mounted on its back. There was also another example on display which you could walk through but we didn’t get a chance as we only got this far down the airfield late in the day.

Stood a bit further away the full view – mired a little by the generators around it and the fences behind. 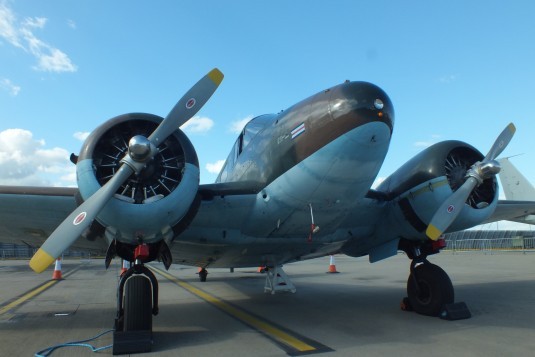 Rutan Long EZE – a home built aircraft with a range of just over 2,000 miles or with a back seat fuel tank installed it was able to fly for over 33 hours covering a distance of 4,800 miles. 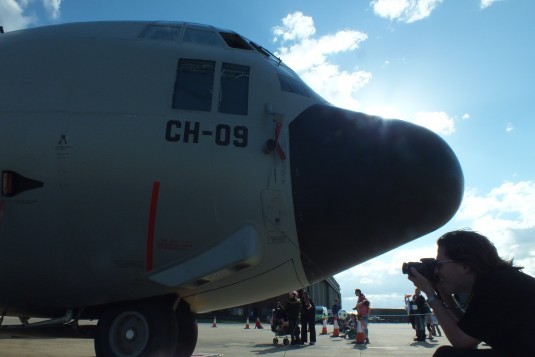 This is Tom – the other friend that came to the airshow with us – taking an opportunity to photo the Hercules.

There were several no shows unfortunately as there would be with any large airshow. Unfortunately one of the missing planes was the Vulcan XH-558. The Vulcan in this photo is the one on permanent sentry duty at RAF Waddington – this is where they used to be based. It turns out that a month or so beforehand the two port engines basically exploded – though that sounds a little more dramatic than it was. Thankfully the airframe wasn’t damaged in any way so it was only the engines to be replaced but there wasn’t enough time to fully flight test it for public displays. It was an enormous shame as last year (2011, don’t forget this is an old blog reposted) it was a truly awesome sight.

I hope you’ve enjoyed the photos as much as we enjoyed the day. As always any comments will be greatly appreciated so please feel free to say what you thought of this – good or bad.